“What kind of place are we in where nobody cares?”

Despite the many beautiful voices and tracks on this weeks Cabeza de Vaca show at Scanner FM, the stars are undoubtedly Essex group Disco Inferno who are enjoying a belated and most deserved moment in the spotlight.


The catalyst for this attention is the release of “The 5 EPs” compilation on One Little Indian that as its name implies, colletcs together five singles of almost all non-album tracks from the period 1992-1994.

The CD version came out last year and its success prompted the release of a double vinyl edition that has kept the group clearly in the consciousness. One suspects a certain amount of guilt in this, since the group were clearly overlooked in their time, something that is both surprising and sad since back in quiet little Perth in Australia at the beginning of the 90s it seemed that everyone owned and loved “In Debt” released on Ché Trading back in 1992.

The liner notes to the vinyl release by David Howell of the Fat Cat label and Obsessive Eye fanzine are fascinating and complement a lot of the other recent material made available on the group. Check out also a review of “The 5 EPs” at FACT and the brilliant interview at the Quietus conducted late last year and a brief article in the Guardian .

In addition to learning that Daniel Gish of Bark Psychosis fame was once a member of the group, Howell’s liner notes demystify how the group made their sounds, describing in detail the gear that Disco Inferno started using and the problems it caused:

“Principally inspired by My Bloody Valentine’s dense swirl, by The Young Gods Wagnerian, sampler-enhanced post-industrial rock, and by Hank Shocklee / The Bomb Squad’s sample-heavy, pressure-cooker productions for Public Enemy, they dismantled their conventional indie set-up in one subversive, resolutely non-rock gesture. Pulling back from the idea of being entirely sample-generated, [vocalist and guitarist Ian] Crause replaced his standard guitar pickup with a hexaphonic Roland GK2 MIDI version (outputting separate signals for each string), which fed into a Roland GI10 (a guitar-to-midi interface that could track pitch). [Drummer Rob] Whatley bought a set of MIDI drum pads [and later a full electronic dDrum kit), and the combined output of this and the guitar data fed into a Philip Rees MIDI merge, and then a Roland S750 sampler. Unable to afford the switch to MIDI, [Paul] Wilmott’s bass remained unmediated and – like that of Joy Division’s Peter Hook or PIL’s Jah Wobble – came to the fore as lead instrument, functioning as a stable anchor and often the sole point of obvious melody. Recording as a live band with guitars and drums triggering a MIDI-based sampling system, the results came to resemble some chaotic studio explosion. Notes, chords and beats were abstracted into shifting blocks of sampled sound. Each piece of Whatley’s kit, each string of Crause’s guitar could be wired to a separate sample (with each fret affecting its pitch or pan position), unleashing in real-time a limitless flood of sound: the burst of fireworks, dripping water, breaking glass, peeling church bells, crashing cars, screeching gulls, clicking camera shutters, revving engines.”


The equipment was not without its problems. The old Atari computer used for the recordings would endlessly crash and playing live was frought with difficulty for the same reasons. Crause later described it as “vaguely amusing nightmares of malfunctioning and crashing equipment.” It is arguably this reason above all others that might have led to the group’s downfall. Media praise had, after all been genuinely positive, if not as prolific as the group might have like, but their inability to gain momentum on the road and also to enter into any scene perhaps cost them the most. Disco Inferno were forever outsiders, embracing sampling and technology at a time when indie, surprisingly, turned its back on the burgeoning “baggy” scene, while Crause’s obvert political lyrics may have been too much for many.

"Foreigners get hushed-up trials
And you're waiting for a knock at the door
Which would tell if you spent the next few years
Free from life attacked by petrol bombs
The price of bread went up five pence today
And an immigrant was kicked to death again."


Wilmott explained the bands position clearly to Howell in an interview:

“We appeared to exist within a bit of a bubble. The guitar kids didn’t like us because they thought we were weird. The electronica people didn’t connect with it. The art crowd weren’t really sure about us either… we existed in this strange never-space where we sat outside looking at the Venn diagram and wondering why nobody liked us…”

There are some post-Disco Inferno curiosities floating around, more than I have briefly collected here, including several unreleased tracks that might see the light of day again soon, and surely there is now a call to re-release the early material on vinyl or even CD as well, as even the CDs are fetching high enough prices on Discogs?

To start, an unreleased Disco Inferno track from the “Technicolour” sessions:

A BBC 3 live radio session was post-humously released as “The Mixing it session” by Tugboat in 1999.


Psychogeography is a term that seems to come up a lot in terms of music these days (see also the previous post on Punk and Jon Savage) In particular, Patrick Keiller’s films are hailed a big influence on the politics and sound of Disco Inferno and blend in with Crause’s left-wing politics. 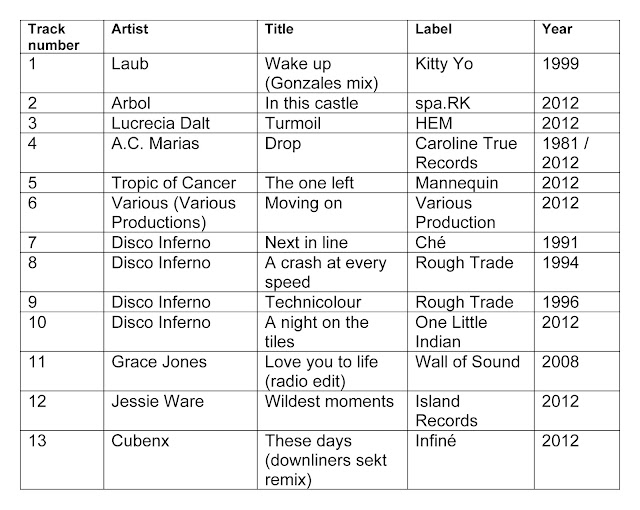