The dub techno community seems to inspire as much devotion as it does scorn, especially from critics who often complain of its sameness. A trawl through the eight tracks in this week’s Cabeza de Vaca show would suggest that they don’t sound the same even if many stick to the tried and true template. But what genre of electronica does not have its ground rules? This is indeed the framework of electronica and the dancefloor: it has to fit together, like Lego bricks and it doesn’t fit if the pieces are changed too much. Dub techno’s strength is in texture and ambience. Dancing is not necessary, neither is breathing or movement sometimes given the gaseous and will-o-wisp nature of so many tracks and that can only be a good thing.

The original idea of today’s show was to have a focus on some of the recent releases by Deepchord, who like some other dub techno artists, namely Quantec, My Cloudy and Bvdub (if you still consider him dub techno) release a lot. It soon became apparent that looking for some of the smaller and often more net-based labels was a more rewarding way to focus the show. The sad thing was there was also plenty of tracks that couldn’t fit in.

A special shout out then to Merino at the Woods n Bass label as I really wanted to fit in “Retina”, but didn’t have time. Next show! There is also so much good stuff on Entropy Records especially that couldn’t fit in. Maybe a special on them one day. They deserve some extra attention as well for their packaging details and broad release policy, doing everything from ambient to modern classical. Their proposed vinyl box set could also be an interesting one to keep an eye on for 2013. Many of them are branching into vinyl such as Pong Musiq and ZeECc, but some are still digital only or even fledgling like Future Reactions. This is also a subtle way of saying that these labels need support as they really do hold the community together and they do work hard. It’s often difficult to stand out when there are so many labels vying for your time, but it would be a great loss if these labels went the way of record stores and disappeared. 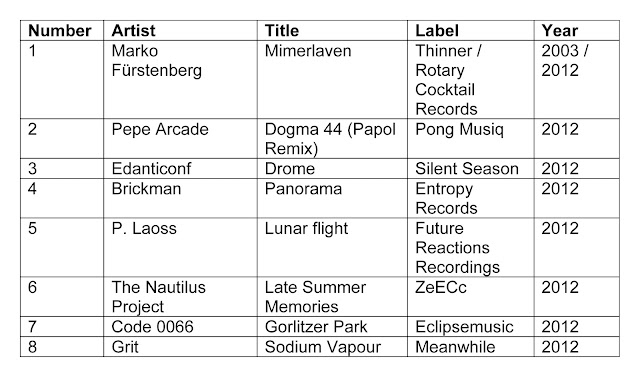 
Important Note : many of the older shows are no longer archived at Scanner FM doe to change of the server to host the new layout and programming. If anyone is interested in hearing older shows, please email me at floatinghead9[at]yahoo.es and I will arrange something for you.
Posted by floatinghead / Cabeza de Vaca at 11:50 PM