The full review can be found here, but a few additional points. 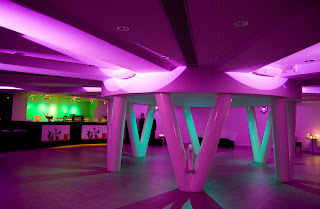 One is timing: I didn’t mention, but perhaps it is better proposed as an open question than a final remark, but maybe it would have been better to stagger the artists than start and finish them all at the same time. The reason for this is so that everyone can see the opening of Tama Sumo and the end to give thanks (or not if that was your inclination). Meantime, you can move around and catch the opening of Fred P and likewise do the same for Santiago Salazar and close with everyone who wants to say moving up to Jeff Mills. Sounds like a simple idea for a two-room show, but maybe not as easy as it seems given that each artist was given a good (and proper) 3 hour set. Add 2 x 3 hours plus one to stagger and you are talking about 7 hours. No problem for afterhours all day clubs like Berghain, but in Barcelona we don’t have that luxury. That means closing at 5am (albeit early for a club here where the normal time is 6am) means starting at 10pm for one of the principle acts when nobody will show. That is, you can’t do it. It’s too early. The early crowd at the party was a good example: pretty full upstairs, but very quiet downstairs (and was a bit the same later on for Santiago as well). But the complaint here is most definitely not against the organization, unless you want them to tone it down (I don’t), but rather is a complaint against the club hours. Three hour sets are really almost a minimum expressive time for a DJ (maybe some live acts might find longer than 60-90 minutes harder) and Micro Mutek got that right with Theo Parrish’s (relatively) lengthy closing set, just to name one example. So the open question is, how do you shoehorn several lengthy sets into a night that you want to be big if you have to close early? Hats off for Alfonso Lopez for realizing that big sets are more expressive and for trying to fit them all in even if it wasn’t perfect.


You can’t beat Salazar’s set on the night nor his podcast for XLR8R  from earlier this year. Get it before they take it down! 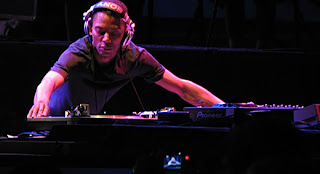 Second point: how to identify tracks in a club. I listen to tons of techno, house, whatever, but I still find it damn hard to work out whether I ever heard a track before in a set. The problem is the big difference in sound between your crappy speakers at home and the big stacks at clubs, which make everything sound more banging than it might normally do. It’s harder still to pick tracks with excellent DJs like Sumo or Salazar who range so far and wide that even the best knowledge is lost trying to work out the tracks. Even with Jeff Mills, who put in such a tight set in terms of sonic range, you have to wonder whether it was really all him, or not, without having his discography (dub plates included) on your iPod in the club. Mills was incredibly striking on the night for his streamlined homogeny of sound, so electric in a weird way, when compared to everyone else, who brazenly showcased some funk, jazz, soul, minimal, whatever sounds, but Mills kept it so narrow and interesting for the parts I saw, unbelievable. Some of the tracks that were easier to spot were Jark Prongo’s excellent and weird 1997 track “M-Tech” which was re-released by Mojuba off-shoot a.r.t.less in 2008 backed with the 1995 track "Spadet", both originally on Dutch label Pssst Music.

The other was Âme’s “Rej” which is one of the more celebrated tracks of recent years and easy to spot, but somehow a surprise in a heavier Detroit set.


Upstairs with Mills though it was a lot harder. Is this “The Bells”? “The Dancer”? “Alarms”? So many tracks go around in your head at the moment that un less you have a better memory than me (or drink less vodka and Red Bull) you might have trouble recalling scientific detail when you wake up in the morning.

Thanks to Alfonso as always and see you at DJ Qu!
Posted by floatinghead / Cabeza de Vaca at 11:43 PM